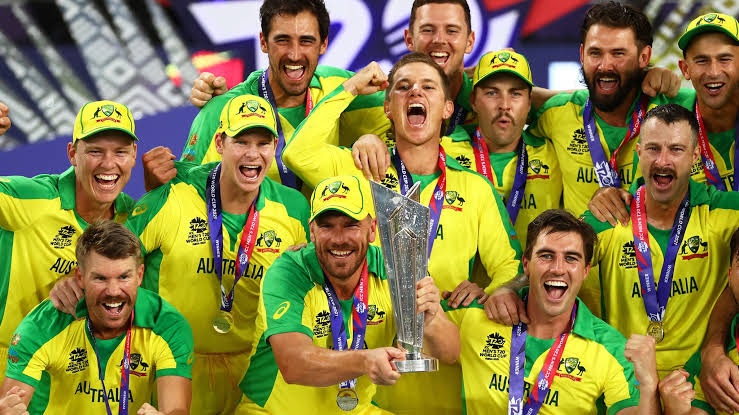 On Sunday, Aaron Finch’s men won the tournament after defeating New Zealand in the final, revealing a welcome return to form and supremacy for a gritty team in need of a makeover. David Warner’s runs, Mitchell Marsh’s audacity, Matthew Wade’s fireworks, particularly in the semi-final against Pakistan, and Adam Zampa’s shrewdness all contributed to Australia’s rise to the top of the T20 format.

New Zealand, though, was not far behind; runner-up in the 2019 World Cup, winner of the ICC World Test Championship this year, and now second in the T20 World Cup, Kane Williamson’s men have proven to be the most consistent outfit across formats.

When New Zealand batted first, they scored 57/1 and lost the T20 World Cup final in the first 10 overs. In the next ten overs, they went into fifth gear, making their total exceedingly difficult to reach. However, despite playing on a beautiful wicket appropriate for a T20 final, they were still roughly 20 runs short.

Australia was batting second after Aaron Finch’s routine toss win when the ball was coming off the bat even more brilliantly. Despite a couple of turned deliveries from Mitchell Santner, David Warner and Mitchell Marsh were unfazed in their chase of Australia’s maiden T20 world crown, which adds to their five 50-over World Cup trophies.

It was a time of atonement for Warner. Marsh was carrying on a long family tradition that includes three Baggy Green holders. A 92-run second-wicket stand between the two, which slammed the door on the Kiwis, revelled in both its strength and tactical skill. Marsh went after Santner, while Warner went after Ish Sodhi, who was under pressure and bowled some mediocre deliveries.

Jimmy Neesham was the last guy standing for New Zealand bowling after the spin-choke was removed. Warner joined the party with another maximum after Marsh pushed him back a few rows over the deep fine leg boundary.

New Zealand was at a loss on what to do. Marsh picked the world stage to climb to popularity, more than a decade after Dean Jones made the forecast. Until this game, the 30-year-old had a solid career as an allrounder and utility man, with ups and downs. He finally became a match-winner to help Australia win the World Cup.

His 77-ball inning of not out was deserving of Player of the Match honours. The Kiwis were taken aback by its daring. Apart from initiating a Powerplay run-rate rise, Adam Milne’s six followed by back-to-back fours provided Australia with the psychological upper hand over their trans-Tasman foes early in their chase. Australia maintained their lead until the final ball of the game when Glenn Maxwell reverse-lapped Tim Southee and joined Marsh in a war dance.

The ICC Twenty20 World Cup’s overarching theme was Australia’s reaffirmation of their cricketing dominance. After the West Indies’ dominance dwindled in the 1990s, Australia was the first to take top money in the willow game, before England, India, and New Zealand all demonstrated their prowess at different times.

To make matters worse, the 2018 ball-tampering scandal tarnished Australia’s image, and it lost two-Test series to India at home. Its recent performances have been mediocre, but when frantic cricket became synonymous with the United Arab Emirates, which initially hosted the remainder of the Indian Premier League (IPL) before hosting the T20 World Cup on behalf of original host India, Australia emerged victoriously.

How to Use Top Soy Free Meal Replacement Protein Drinks