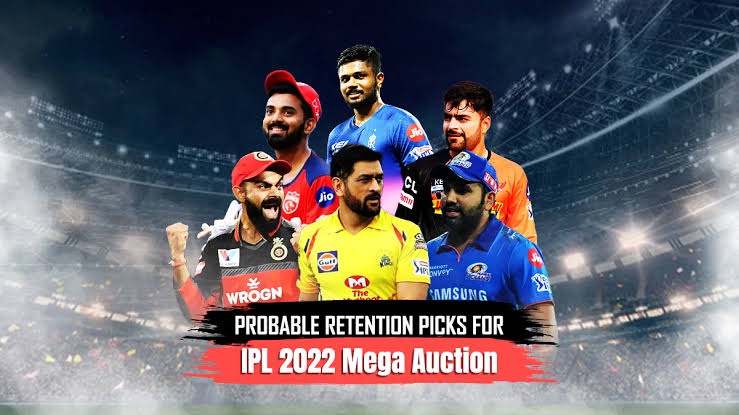 The Indian Premier League is set to grow with the addition of two additional teams, Lucknow and Ahmedabad, starting next season. It will increase the level of competition because existing teams will be pitted against new challengers. The big auction will take place ahead of the next season, giving the new franchise a chance to field a competitive team. The former eight franchises have a difficult challenge ahead of them before the auction: player retention.

Each club is allowed to keep a maximum of four players, according to the rules. Only two of these can be international cricketers, and only three Indians will be allowed to be retained before the sale.

All franchises must submit a list of retained players by November 30, 2021, according to the BCCI.

>The Cost of Keeping Players

If both players are retained, the franchisee will pay INR 14 and 10 crores to their first and second choices, respectively. If a franchise only keeps one player, that player will be worth INR 14 crores.

Cards for Retention are as follows

Chennai Super Kings – Apart from Dhoni, Chennai Super Kings are likely to keep Ravindra Jadeja and Ruturaj Gaikwad. Their pick for the foreign player retention will be one of Moeen Ali, Sam Curran, or Faf du Plessis, with the franchise revealing that skipper Dhoni will have the last word. According to a prominent CSK executive, the franchise would make every effort to repurchase the players they did not keep at the auction.

Mumbai Indians – Apart from Rohit, it may be Jasprit Bumrah or Ishan Kishan, but the internal argument for the five-time winners is about Kieron Pollard, who is considered as a retention candidate. MI is unlikely to release him.

Delhi Capitals- Apart from Pant, DC is rumoured to be keeping Prithvi Shaw, Axar Patel, and Anrich Nortje. The main point of contention in their camp is Avesh Khan, who has performed admirably. He might come for just Rs 4 crore, the price tag for an uncapped player, even though he has yet to play for India.

Royal Challengers Bangalore – Aside from Kohli, Devdutt Paiddikal, Yuzvendra Chahal/Mohammed Siraj, and Glenn Maxwell might all be retained. The question for them to consider is who will be their skipper. With KL Rahul unlikely to be available in the auction, they’ll need a capable replacement for Kohli, who has stepped down as captain.

Sunrisers Hyderabad – Williamson, who is also poised to retain as their captain, might be the only one they keep. The second retainer may be Rashid Khan, the fantastic leggie, but we know that the two parties are now negotiating.

Rajasthan Royals – Jos Buttler has no doubts. RR is expected to keep Yashasvi Jaiswal as well. Sanju Samson, Jofra Archer, and Ben Stokes are other contenders for the franchise’s starting position.

Punjab Kings – Some uncapped players, such as Ravi Bishnoi and Arshdeep Singh, may be kept. Shahrukh Khan, who hammered a last-ball six in the SMAT final, is also on the list.

Kolkata Knight Riders – The frontline options appear to be Varun Chakravarthy and Sunil Narine, who have received a lot of attention from the franchise. Shubman Gill and Andre Russell are among those who follow.

How Can you Make your Dating Session Successful