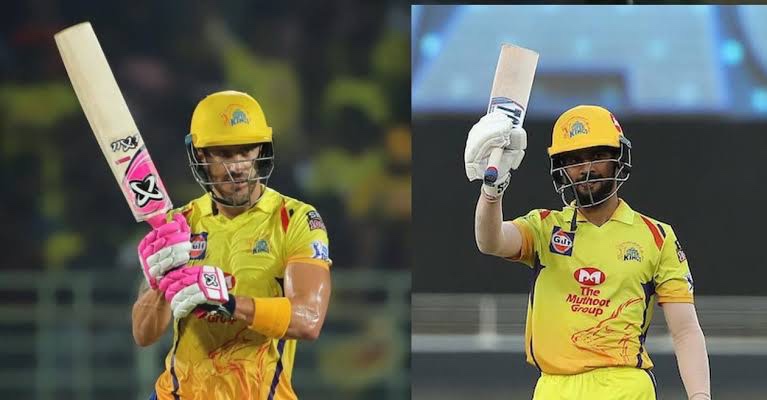 Faf Du Plessis is one of the most decorated and elegant player to watch in modern-day cricket. He’s so good to watch when he’s on a roll with the bat in hand.

While playing for their IPL franchise, Chennai Super Kings, CSK were able to score more runs in the powerplay than any other team was even able to score in IPL 2021.
Faf Du Plessis finished the IPL 2021 season as the second highest scorer with 633 runs, just two runs behind his CSK opening partner Ruturaj Gaikwad.

Ruturaj Gaikwad and Faf du Plessis of the Chennai Super Kings broke the shackles , with breaking a 7-year-old franchise record for the most fifty-plus stands by two players in the Indian Premier League.

Ruturaj and Faf du Plessis also contributed with a fifty plus stand in the IPL 2021 final after Kolkata Knight Riders captain Eoin Morgan won the toss and asked CSK to bat first.
It was their seventh fifty-plus stand in IPL 2021, as the duo continued their golden run with the bat. Ruturaj and du Plessis broke the previously held record of Michael Hussey and Suresh Raina’s 2013 Chennai Super Kings record of six fifty-plus partnerships in a season.

Faf du Plessis and Ruturaj Gaikwad each scored more than 600 runs in the 2021 edition of The IPL, making them only the third pair in IPL history to do so.

It’s the first time since the 2011 Edition of the IPL, where two batsmen from the same team have finished as the league’s highest scorer and second-highest runs scorer.

Faf du Plessis and Ruturaj Gaikwad continued their run-scoring form and belting runs for fun in the IPL 2021 final, taking the race for Orange Cap to the wire. While Ruturaj hit a 27-ball 32 to overtake KL Rahul for the orange cap and finish with 635 runs, du Plessis fell just two runs short of matching the milestone and winning the Orange Cap with a better and higher strike rate.

The Best Cleaner For Your Glasses