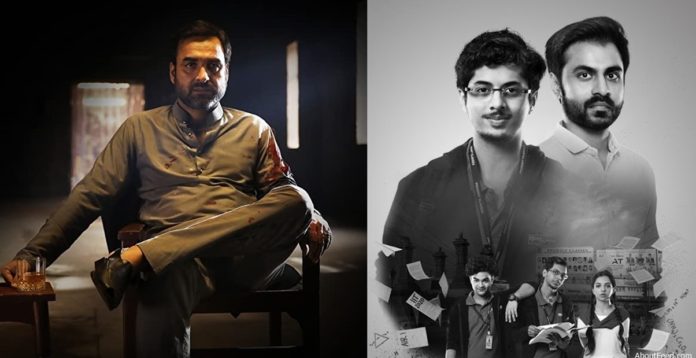 It is 2020 and the world is fighting with the COVID-19. Almost all the countries are affected by the pandemic and countries all around the world are implementing lockdowns to prevent the spread of coronavirus. India is also one of these countries affected by the coronavirus and has been in lockdown since 25th March. People are finding it difficult to keep themselves entertained in this lockdown so here we are to help you and keep you entertained in your homes so that you do not step out of your homes during this lockdown. There are various OTT platforms such as Netflix, Amazon Prime, Hotstar and what not that provides you with tonnes of shows, movies and web series you can binge watch . So today we are bringing you the list of Top 5 Indian Web series that will keep you hooked to your screens. So get the popcorn’s ready and prepare to binge watch the entire series.

Directed by TVF the series is available on TVF Play and also on YouTube. It is the first Indian web series which is shot entirely in black and white. The show is based in Kota, Rajasthan where lakhs of students pursue coaching to get admission in the top engineering colleges such as IITs. The show follows the story of a 16 year old boy who moves to Kota to follow his dream of studying in IIT. The show is very relatable to students who pursue similar coaching to fulfill there dreams. The entire show feels like a beautiful journey and is a must watch.

Sacred Games premiered in June 2018 and created a huge hype among the youth. The show is based on the novel Sacred Games written by Vikram Chandra in 2006. This show is available on Netflix and it is the first Netflix original series in India. The show consists of a brilliant cast in which Nawazuddin Siddiqui , Saif Ali Khan, Radhika Apte and Pankaj Tripathi are some prominent names . The show was also nominated for Emmys and is a huge hit in India. It consists of 2 seasons of 8 episodesÂ  each and the 3rd season is awaited. This show is a real thriller and will keep you hooked all the way till the last minute.

Mirzapur produced by Excel Entertainment is a crime thriller available on Amazon Prime. This series was also released in 2018 and has garnered aa good response from the viewers. The series is based around a gangster in Mirzapur, Uttar pradesh and has a complex narrative to make it an epic. The fans of this show are eagerly waiting for the 2nd season of this show for the last two years. The first season contains 9 episodes and surely you will binge watch the whole season.

Made In Heaven is also a production of Excel Entertainment and it premiered in March , 2019 on Amazon Prime. The show is directed by Zoya Akhtar and Reema Kagti and has garnered a lot of positive reviews among the critics. The series revolves around the madness of the Big Indian Weddings. All the characters in the show are pretty entertaining and the show is totally worth your watch.

The Family Man starring Manoj Bajpayee is an action drama available on Amazon Prime Video. The show has been highly rated by various critics and is in production fora second season as well. The show premiered in September , 2019 and revolves around the main character of Srikant Tiwari played by Manoj Bajpayee who is a middle-class man secretly working as an intelligence officer. Throughout the series you will be deeply engaged and will enjoy the sleek one liners and will be mesmerized by Bajpayees’s brilliance. It will keep you on the edge of your seats and you will surely enjoy it.

So hope you like our recommendations and enjoy your lockdown by watching these super shows and stay home and keep yourself entertained.