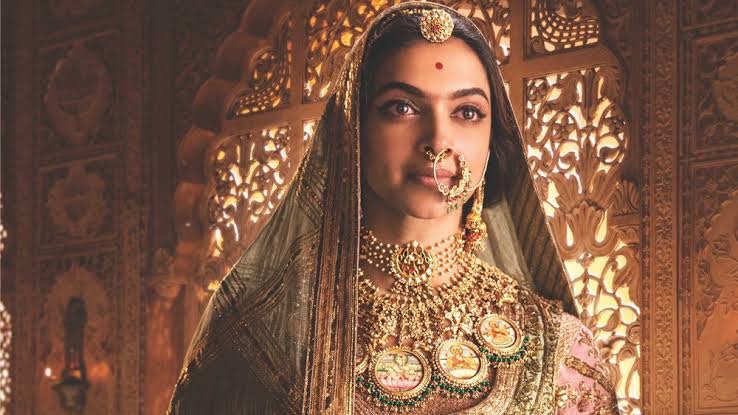 The Movie was produced by Sanjay Leela Bhansali under Bhansali Productions after being so problematic for them.

Bhansali, who is known for his visual direction, spellbinding music and triumphant, passionate productions, and Padmaavat will sure not disappoint you.

The Movie is Set in Medieval Rajistan, the film sets the story on Rani Padmavati,a gorgeous, rich Queen of Rajput who is married to the great warrior, Mehwar. However, the Afghani, villainous king sends threats to Rajput and wants to earn Padmavati’s love. The film has fun, foot tapping songs, especially ‘Ghoomar’, the beautifully shot sequence and show stealer of the movie. The music from start to finish will undoubtedly keep you on the edge of your seat.

Apart from its beautiful music, there are great, epic battles that change the narrative from a light to dark effect which is seen throughout the movie. The song Ghoomar was super hit around the country with some fabulous acting done by Deepika in the song with her Royal Look for which she was paid an big amount of ₹12 Crores for the Main Lead.

One of the best things about Padmaavat are the performances of these talented, well-known stars. Deepika Padoukne leads as Padmavati, looking stunning as usual in spectacular costumes which spin so fast during incredible, fast-paced dance sequences. Shahid Kapoor plays Mehwar the King of Rajput alongside Ranveer Singh, Aluddin, who is the real actor out of all.

But the best thing of Padmaavat is the cinematography, this is the main heart of the movie, from the magical palace to the incredible battle sequences , the narrative is developed through astonishing visual goodness.

Sounds great, acts great , looks great but is it actually great?, the story of Padmaavat is based on the epic poem of the same name, so they sharpened the creative work for a very unpredictable ending…

Padmavaat is a Bollywood hit and opens up the year with enchantment and boldness. This is Bhansali’s best work and is definitely worth the watch.

How To Improve Your Car’s Gas Mileage

The Beloved Story of Virat Kohli and Anushka Sharma