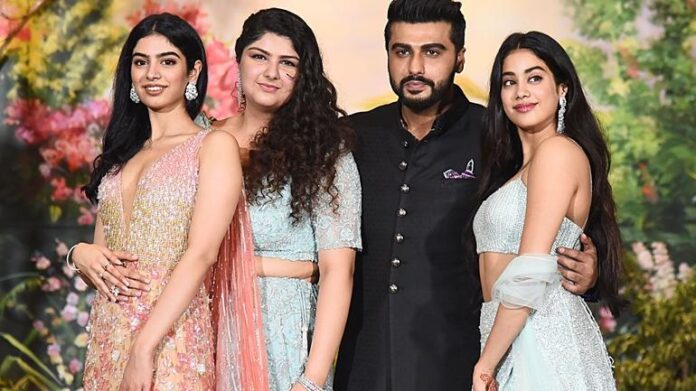 Ever since Boney Kapoor tied knot with Sridevi, Arjun Kapoor was never really fond of her. In an old interview, Arjun acknowledged Sridevi as his father’s wife not as his step mother. Arjun never bonded with Sridevi’s daughter- Khushi and Jahanvi until the days he passed away. Arjun and Anshula’s bond with Jahanvi and Khushi went from ‘Non-Existent’ To ‘Perfect‘ in a very short time.

Arjun, who have been through the pain of loss of a mother earlier in his life, came in support of his father and step sisters in their hard time. Arjun told DNA, So much happened that we didn’t have the time to figure things out. Having experienced something as harsh as that, I wouldn’t wish it for my worst enemy. I know what it feels like to be in a situation where you’re grasping for life.

The whole family got an opportunity to pose together at Sonam Kapoor-Anand Ahuja’s reception. They got clicked a perfect family picture. In one of the interview, Arjun mentioned that the first he hugged Jahanvi it felt right to him. He wanted to be with them at that sensitive time because his mother would have expected him to do so too. Actor also went up on saying that no when his phone buzzes, its not only Anshula anymore. It’s Jahanvi and Khushi too. His father calls him now more often.

Calling himself lucky as actor got a chance to choose who his family is going to be, Arjun said “Now when my phone rings or I get a message, it won’t only be Anshula messaging me; I also have Janhvi and Khushi reacting to a photo on Instagram or to a song. My father calls me more often. I’m a very lucky man to have two sisters enter my life at the age of 33.”

Arjun and Janhvi made their first joint appearance on screen on Karan Johar’s chat show Koffee With Karan earlier this year. On Koffee couch the sibling talked at length about their equation and how together they surpassed the tough time.

“The other day, Janhvi had come over for dinner. She felt bad that she wasn’t around for the release of my recent film. A year ago this relationship didn’t exist. It’s nice to have more people around you who support and encourage you and who you can share the smallest things of your life with.” Arjun Kapoor said.

“It’s still work in progress. By the grace of God, people have been kind enough to have allowed us that space to grieve and come together, learn about each other. They are very good kids. I ideally wouldn’t have wished to meet them in these circumstances, but maybe we have to make the best out of the worst situation.” Arjun Kapoor added.

Currently, Arjun Kapoor is in headlines because of his relationship with Malaika Arora. Buzz states that duo is planning to get married by the end of 2019. On Koffee couch Arjun confirmed that he is not single anymore.

The 4 Essentials Of Corporate Gift Buying

Is Marriage On The Cards For Malaika and Arjun?