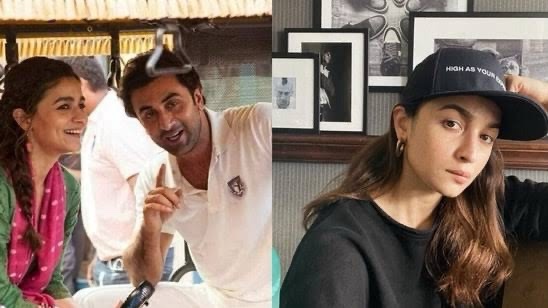 Alia Bhatt and Ranbir Kapoor’s romance has been making headlines throughout the internet and has often been described as the perfect couple.

Ranbir and Alia have been in a relationship since around the year 2017, and they have got closer and have become even closer to each other’s families. Ranbir’s mother, Neetu Kapoor, and Riddhima Kapoor Sahni adore Alia and frequently comment about her through Instagram posts. Ranbir is also commonly seen in photographs with Alia’s sister Shaheen Bhatt and mother, Soni Razdan.

A previously unseen photo of the couple was shared on social media, with Ranbir kissing Alia on the cheek. Ranbir and Alia’s romance has painted the town red, from secret getaways to festive celebrations and attending events together. Here’s a look at how it all started and their much-discussed wedding.

In 2018, Ranbir Kapoor and Alia Bhatt turned their heads with their surprising yet glamouring appearance at Sonam Kapoor’s wedding. Fans of Ranbir-Alia were cheering for their love chemistry as they stepped out in their traditional best for the grand affair. Alia rocked in her signifying lime green lehenga, while Ranbir looked dapper and hot in a white kurta and black pants. Ranbir and Alia looked like a perfect couple and appeared to have been made for each other.

Ranbir and Alia will be implementing their chemistry in the movie Brahmastra. Meanwhile, Amitabh Bachchan, Mouni Roy, and Nagarjuna will co-star with Kapoor and Bhatt in Brahmastra. The film is being marketed as a fantasy adventure franchise, with Ranbir playing Shiva, a character with unique abilities, and Alia playing Isha.

It is also said that the couple is supposed to marry after the film’s release and get their marriage goal ticked soon.

50 Shades of Grey Actor Divorcing His Wife for Dakota Johnson

The Challenges of Caring for Parents with Dementia