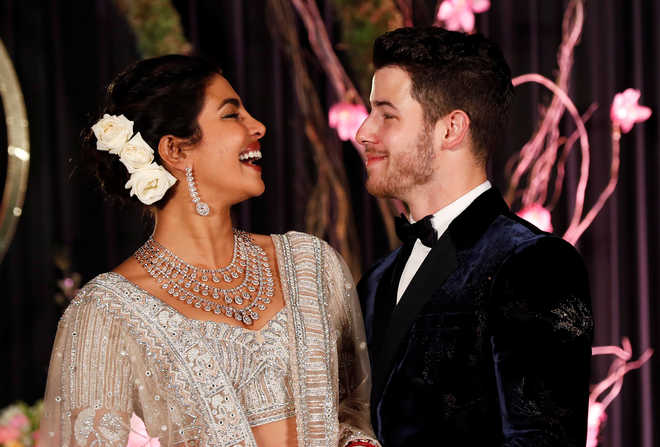 Nick Jonas and Priyanka Chopra’s love-story was nothing less than any romantic movie script and their wedding ceremony was as magical as fairy-tales. Couple tied knot as per the Hindu rituals and also had Christian wedding too. In a recent interview Priyanka Chopra revealed that it was Nick who suggested her to have two weddings and it simply melted her heart.

On December 1, they had a Catholic ceremony followed by a big-fat Hindu wedding on 2nd December atÂ Jodhpurâ€™s majestic Umaid Bhawan Palace.Â US-based publication-People Magazine gave the exclusive glimpses of their wedding in their latest edition. Couple hosted their first wedding anniversary in Delhi for family, friends and some renown business tycoons and politicians.

A heartfelt thank you to our Hon'ble Prime Minister Shri @narendramodi ji for gracing us with your presence. Touched by your kind words and blessings. @nickjonas

Here presenting you the series of pictures from Priyanka-Nick’s Delhi wedding reception:

In conversation with People’s magazine for the latest edition, Priyanka revealed that generallyÂ every girls dreams to be a princess on their wedding days but she never actually had plan of what she wanna be. Talking about two big weddings actress said that- “Being able to haveÂ two big weddings, in India, with our closest family and friends was unbelievably special.â€

For Christian wedding, Priyanka Chopra walked down the aisle with her mom-Madhu Chopra breaking the stereotype that a bride has walk with a father or any other male member of the family. Priyanka reveals that it was very emotional moment for her and she was equally nervous too.

â€œIt was all tears. All tears.Â I could not hold it in. I think I was nervous and scared. But as soon as the curtains opened, andÂ I saw his faceÂ it was just like everything settled and I knew I was making the best decision of my life,â€Â she said.

â€œI love that our wedding wasÂ a religious mash-up.Â We took beautiful traditions that we both grew up with and personalizedÂ them in a way that made sense for us. Itâ€™s been incredible to find the commonalities between our beliefs and figuring out how to blend them in a respectful and meaningful way.â€Â

Nick Jonas and Priyanka Chopra’s love story is a new generation romance. It all started over social media. They official met at Oscar’s after party and instantly hit off.Â A video surfaced on internet in which we saw that Nick didn’t kissed Priyanka when she invited him over drinks at her place as Priyanka’s mom was there in the apartment.

Congratulations Nick and Priyanka. Stay tuned with us for more Bollywood news and updates.