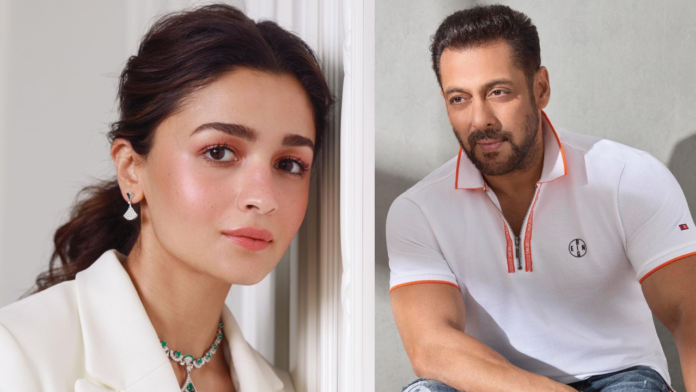 It is a dream of every Bollywood actress to get a chance to work with Sanjay Leela Bhansali once in their career. Alia Bhatt is one of those lucky actress who is going to star in Sanjay Leela Bhansali’s another magnum opus. Alia also took to Twitter and recalled that it was her dream to be part of a Sanjay Leela Bhansali film. She wrote, I was 9 when I first walked into Sanjay Leela Bhansali’s office, all nervous and hoping and praying that I would be in his next film. It’s been a long wait. Dream with your eyes wide open they say & I did. Sanjay Sir and Salman Khan are magical together & I can’t wait to join them on this beautiful journey called Inshallah

This is a first time Alia Bhatt is collaborating with Salman Khan. Earlier Alia Bhatt shared screen space with Salman whenever she appeared on Colors- Bigg Boss to promote her upcoming films.

The age difference between the leads has been talk of the town. Even netizen criticized the pairing by making memes but Alia is full of excitement to team up with Salman Khan. In one of the interview actress said, I didn’t get any criticism. I think I got a lot of excitement. I think speculation is also a form of excitement in a way and why shouldn’t there be speculation. There should be and at least I am not bothered by that and I don’t think Salman or Bhansali sir are bothered. I think this is a filmmaker who has given us very good films, he is someone who we all are very fond of and I think we should just trust him with his vision.

Sanjay Leela Bhansali later opened up about the story line of the film. Film is about a 40 year old Business man and a 20 years old girl and so Salman and Alia are the perfect fit for ‘Inshallah’. Some sources revealed that the age gap will play a significant role in the movie.

“All the factors, including age gap, have been taken into consideration. The story will justify the teaming up of two actors, from different generations, on a romantic journey, said sources.

Till now, Alia Bhatt had normal releases except Shaandaar, which was released during the Dussehra weekend. Hence ‘Inshallah’ will also mark her first Eid release too.

On work front, Alia is busy with Ayan Mukherjee’s trilogy- Brahmastra. Salman had a release of Bharat which is doing great job on box office.

Are you excited for ‘Inshallah’? Tell us in a comment section below. Stay tuned with us for more Bollywood news and updates.

Guitars for Beginners – Which Should They Buy?

Here’s what happened when Priyanka Chopra opted out of Salman Khan...