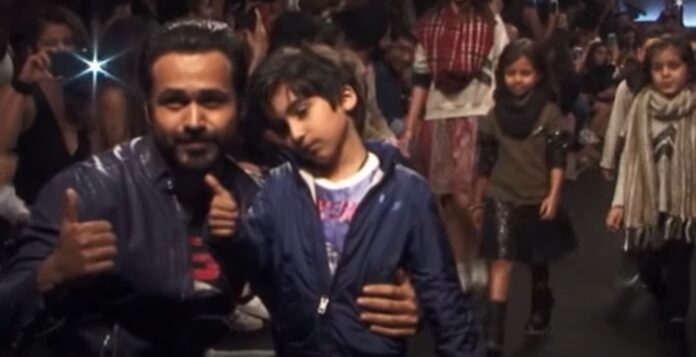 You can’t resist yourself from watching Emraan Hashmi walks with his son at Lakme Fashion Week 2016. Watch the video below:

The daddy cool Mr. Hashmi joined Ayaan on the ramp at the ongoing Lakme Fashion Week Winter-Festive 2016 where father and son walked for the brand Diesel.

In the media interaction after the show Emraan revealed that his son wanna follow his footsteps. As in his son too want to be actor.
He has already decided to be an actor. I don’t impose my ambitions on my son. He can be a doctor, an officer or a scientist or whatever he chooses to be.

He, for some reason, has kind of understood what I do for a living. He didn’t earlier understand the concept of shooting. He first thought it was about shooting with a gun.”

Then he got more confused when I took him for a film shooting, and I had a gun in my hand for a particular action scene. So now he is trying to connect to it, but yes, he wants to become an actor I think he is already working towards it’s said Emraan.

Some days back Emraan Hashmi and his son Ayaan was in the news for the release for book describing Ayaans struggle when he was suffering from cancer and how he recovered.

The Kiss of Life, a book authored by Bilal Siddiqi and actor Emraan Hashmi, was launched by popular author Hussain Zaidi in Mumbai recently. The life affirming book is based on Emraan’s son Ayaan’s battle with Cancer, something that his favorite superhero characters helped him through.

Benefits that you can expect from a Water Purifier

The 7-Maintenance Tips for a Longer-lasting Instant Pot