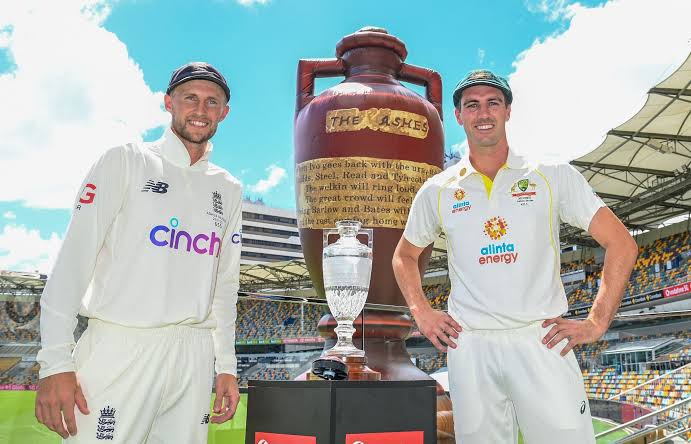 The Ashes 2021-22, one of the most anticipated Test series of the year, begins on Wednesday. To date, 72 editions of the Ashes series have taken place. Australia has triumphed 33 times, while England has triumphed 32 times.

The first match of the Ashes series between Australia and England is set to begin on December 8 at the famous Gabba Stadium. The second Test match will be held at the Adelaide Oval from December 16 to December 20. The MCG will host the Boxing Day Test match between Australia and England from December 26 through December 30. From January 5 to 9, the fourth game of the series will be played at the Sydney Cricket Ground.

The Australian team will be led by a new captain for the series. Pat Cummins has been selected as Australia’s next white-ball captain, following the stepping down of Tim Paine. For the first Test against England, the home team has already named their starting lineup. Marcus Harris, who has been in excellent form in domestic cricket, will open the batting opposite David Warner. David Warner has only played two Tests in the last 23 months, so it will be interesting to watch how he performs in this series.

There has been a lot of talk about Australia’s decision to name a fast-bowler as captain, which hasn’t happened since Ray Lindwall in the 1950s.

Cummins has been the vice-captain for the past two years and was always a front-runner for the job, but he’ll be under a lot of pressure in his debut series.

To cushion the shock, Australia has appointed Steve Smith as his deputy, and the two will work together throughout the series.

England, on the other hand, has a difficult task ahead of it. To be honest, they don’t have the best batting line-up in Test Cricket right now. Joe Root, who has been in the best shape of his life, bears a great deal of responsibility. Root has yet to strike a century in a Test match in Australia, and his average is around 40.

However, England’s skipper has recently been in top form, scoring 1,455 runs in 12 matches in 2021, leapfrogging five men to finish second only to Cook in Test runs for England. Root’s most glaring failing as a batsman has been his poor conversion rate to three figures, a problem he overcame spectacularly this year, scoring six hundred from seven 50-plus scores, twice going beyond 200 in Asia, including 186 in Galle and 180 not out at Lord’s against India.

It’s the thorn in your side, but you can’t ignore it.

On a match-by-match basis, Australia has won almost half of the Tests played at home between the two countries, while England has won 33.5 per cent.

What is Quora? How does it matter in Marketing?