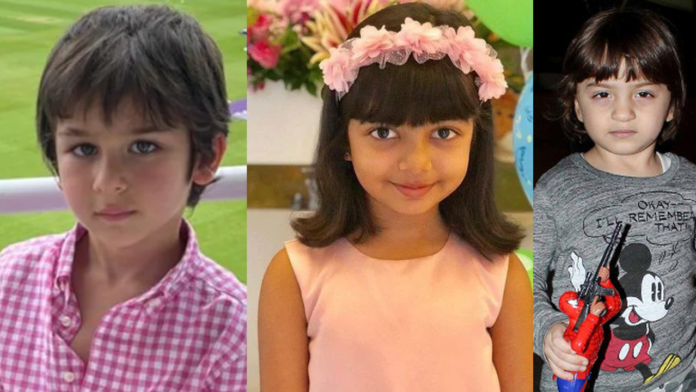 Taimur Ali Khan is favorite among paparazzi. Media is always around him. Media keeps his fans posted with all his latest pictures whether its in his school look or park look. He is so popular that a doll has been modeled after him in Kerala. Nowadays he even wave towards media and also says ‘Hi’ to them.

Taimur’s cousin sister Inaaya Khemmu is equally popular. Her mother, Sara Ali Khan keep posting er pictures on her Instagram. Sara often opposed that media should not use flash light while clicking pictures of kids as it is bad of their health. Inaaya often visits to Taimur to play together and vise-versa.

New born of Shahid and Mira Kapoor- Zain Kapoor is a new sensation of cuteness. Mira recently shared the first picture of the baby on her Instagram. Many says that Zain got the looks from his grandfather- Pankaj Kapoor.

Zain’s elder sister- Misha Kapoor is one of the most loved star kid. Earlier, Mira shared a video on her Instagram handle where she was teaching dance steps to Misha. Mother-daughter duo was worth watching. Shahid often talks about her daughter in events and express how close he is to her.

The protective sister! Older by an entire minute! #mylovestory #roohiandyash

Karan Johar is blessed with two adorable twins- Yash and Roohi. These two old year munchkins are all set to go schools. Recently,Â Karan shared an Insta story wherein Yash and Roohi are dressed with their bags on shoulders and are all ready for the first day at school.Â Karan is one among the cool daddies. Recently he was quoted saying that he won’t mind if his daughter Roohi dates Saif’s son Taimur when they grown up. These adorable twins are heart of kids party happening in Bollywood.

My sunshine turns 5 yrs today but he thinks he is 9! Please donâ€™t tell him otherwise if u meet him. Children should hear their own music, sing their own songs & believe in their own lil dreams…& yeah, hug their papa a lot..

The most pampered kid of Shah Rukh Khan- Abram Khan is a media sensation. He is rarely seen in public. There are many fan clubs of Abram on social media. Recently while he was returning from Aaradhya Bachchan’s birthday he shouted over media saying ‘No pictures’ when media was trying to get closer to him to click his pictures.

A post shared by AishwaryaRaiBachchan (@aishwaryaraibachchan_arb) on Oct 14, 2018 at 8:21am PDT

Aaradhya Bachchan is one of the most popular kid in Bollywood and probably the only kid who accompanies her mother to international Cannes festival every year. This year even Aaradhya’s ook at Cannes was talk of the town. Aishwarya often uploads adorable picture of her daughter on her Instgram account.

Kiran Rao and Aamir Khan’s son Azad Khan is an adorable kid. Since his birth he was in news as Aamir and Kiran were the first few couple of Bollywood who opted for surrogacy. Media rarely manages to get his pictures.

Born in 2012, Nitara is actually ‘Ankho Ka Tara’ of her parents- Akshay Kumar and Twinkle Khanna. She is often seen at birthday parties of the star kids. Normally kids like dogs and cats as pet but Nitara has got a little different taste. She adores ‘Unicorn’. Even once she asked her dad to bring one for her.

Stay tuned with us for more Bollywood news and interesting featured stories.

Know The Differences Between Essence and Serum

How to Choose the Best Walking Shoes for Flat Feet