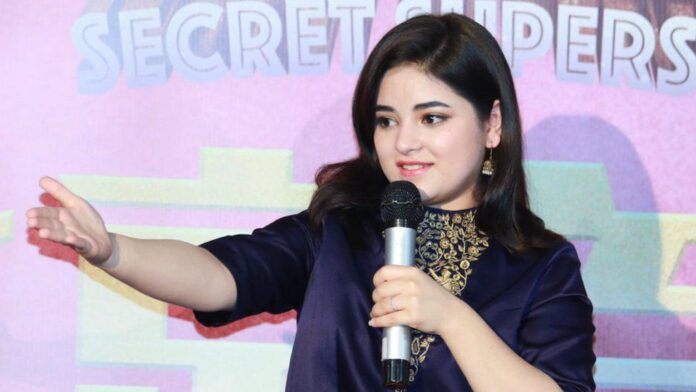 Zaira Wasim who made her big Bollywood debut opposite Aamir Khan in 2016’s Dangal, has announced her disassociation from showbiz. She stated that workings in the industry has damaged her peace, imaan and the relationship with Allah. The Kashmiri-born has penned a detail post on her Facebook page in which she described her decision of joining Bollywood has threatened her religion.

“Five years ago I made a decision that changed my life forever. As I stepped my foot in Bollywood, it opened doors of massive popularity for me. I started to become the prime candidate of public attention, I was projected as the gospel of the idea of success and was often identified as a role model for the youth. However, that’s never something that I set out to do or become, especially with regards to my ideas of success and failure, which I had just started to explore and understand” Wasim said in the lengthy post.

Actress also went up on saying that she received lot of fame and love from the audience but at the same time it has mislead her. She expressed that she is not truly happy with her identity that she has created for herself.

“This field indeed brought a lot of love, support, and applause my way, but what it also did was to lead me to a path of ignorance, as I silently and unconsciously transitioned out of ‘imaan’ (faith). While I continued to work in an environment that consistently interfered with my ‘imaan’, my relationship with my religion was threatened,” she said.

‘Secret Superstar’ also mentioned in her post that in holy book Quran she found her peace.

“In the great and divine wisdom of the Quran, I found sufficiency and peace. Indeed the hearts find peace when it acquires the knowledge of Its Creator, His Attributes, His Mercy and His commandments. I discovered my lack of knowledge of the basic fundamentals of my religion and how my inability to reinforce a change earlier was a result of confusing my heart’s contentment and well being with strengthening and satisfying my own (shallow and worldly) desires,” she said.

There were rumors stating that Zaira’s social media was hacked. Later actress clarified she is herself handling her social media. This to clarify that none of my social media accounts were or are hacked and are being handled by me personally. Kindly refrain from believing or sharing claims that state otherwise! Thanks, said Zaira.

Zaira not only won Filmfare awards for essaying the character she was honored with National Child Award for Exceptional Achievement by Ram Nath Kovind, the President of India, at a ceremony in New Delhi in 2017. ‘The Sky Is Pink’ will mark Zaira’s last Bollywood film which is scheduled to release onÂ October 11, 2019. It also stars Farhan Akhtar and Priyanka Chopra.

Why Does Sneezing Feel Good?