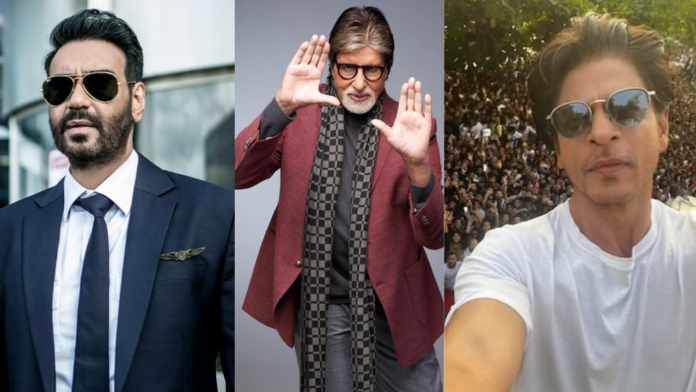 One of the most successful Bollywood star Ranveer Singh who is unknown for his great performance in films like Band Baja Baraat, Bajirao Mastani, Padmavaat and many more was initially rejected by the makers for looking ‘too North Indian’. Little did they know that this guy was meant to be future superstar. Today Ranveer Singh is himself a brand and there are many producers, directors are waiting for Ranveer to sign their project. The powerhouse of energy-Ranveer Singh is currently busy shooting Rohit Shetty’s Simbaa. He will be next seen in Karan Johar’s ‘Takht’ based on a fight to the finish for the Mughal throne.

The Singham of Bollywood- Ajay Devgn faced rejection during his initial days in Bollywood because of his dark looks. Proving everyone wrong, Ajay Devgn has came a long way and today he is counted among the most popular and successful actors of the industry.Â On work front, Ajay Devgn has singed Luv Ranjan’s next film in which he will be sharing the screen space with his Rajneeti co-star- Ranbir Kapoor.

Before Anushka bagged the role in SRK’s ‘Rab Ne Banadi Jodi’, actress auditioned for other films too but got rejected as people called her ‘plain’ for the Indian film industry. We wonder what made them say so. We hope that those who called Anushka ‘too plain for the industry’ must have watched her horror flick- ‘Pari’ where she proved her acting versatility.

Initially many producers and directors refused to work with Katrina Kaif because of her accent and foreign looks. Little did they know that she was going to be the face of top brands and Indian barbie doll. Her last release ‘Tiger Zinda Hai’ with Salman Khan broke many box office records. She will be next seen sharing screen space with Aamir Khan, Amitabh Bachchan and Sana Fatima Sheikh in ‘Thugs Of Hindostan’.

Irrfan Khan is one of the finest actor Bollywood industry have. Even though he was criticized for the ‘way he looked’, he went up on working hard and proved himself with his acting skills.

The ultimate ‘King Of romance’ Shah Rukh Khan who is ruling the world initially faced rejection because of having a ‘chocolate boy’ image. Hope those who all rejected SRK must have watched his ‘Daar’.

Bong beauty Konkana Sen Sharma who proved her acting verstatlity with films like ‘Page 3’, ‘Life In Metro’ and ‘Ek Thi Daayaan’ face d rejection because of her dusky look. Today she is counted among one of the finest actress who has worked in different genres.

Nawazuddin initially got to play small roles because of his ‘unconventional looks’ but this man proved his acting versatility every now ans then. His performance in films like Kick, Badlapur is commendable.

One of the biggest and most-most successful actor Amitabh Bachchan faced rejection in Bollywood because of his heavy voice and tall height. The two quality because of which he was rejected are now appreciated more than ever.

What is Quora? How does it matter in Marketing?

How can Servicenow Asset Management Software Help you Manage Assets Within...