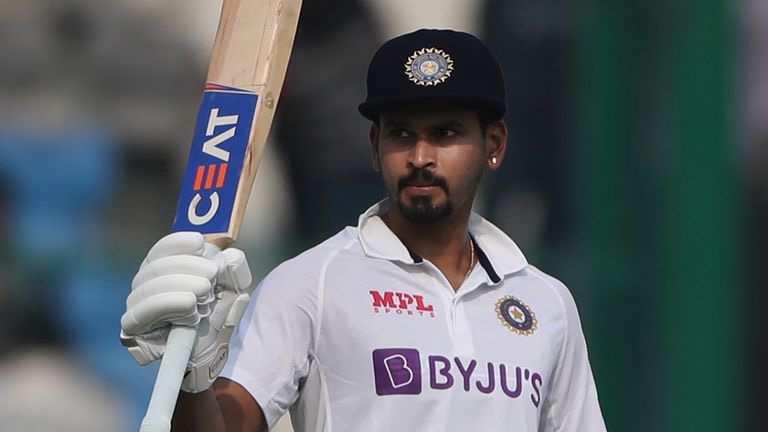 Iyer, who was given his first Test cap by Sunil Gavaskar, showed tenacity in the first innings as well. On Day 1 of the Test, he had a 121-run partnership with Ravindra Jadeja.

On Sunday, 26-year-old young Shreyas Iyer made history by becoming the first Indian batsman to score a century and then follow it up with a fifty in his Test debut. In both innings of the 1st Test between India and New Zealand in Kanpur, Iyer has shown his mental power and character by bailing India out of difficulty.

After losing their big guns Ajinkya Rahane, Cheteshwar Pujara, and Ravindra Jadeja cheaply in the first innings, India’s second innings saw Shreyas Iyer score the majority of the runs. Iyer handled the situation admirably, stitching a 52-run stand with R Ashwin and then another fifty-plus stand with wicketkeeper-batsman Widdhiman Saha to fend off New Zealand’s attack.

Iyer is the tenth batter in men’s international cricket history to score a century and fifty in his Test debut. After Sunil Gavaskar and Dilawar Hussain, Iyer became the third Indian to hit two fifty-plus runs on Test debut.

Iyer smashed a century and helped India extend their lead to 200 runs. After his fifty, he was looking to get loose, but he fell to Tim Southee just before Tea, edging a delivery down the leg to the wicketkeeper. Because New Zealand will bat last on the Kanpur pitch, Iyer’s 65 might be crucial.

Early in his innings, Shreyas Iyer was fortunate when a thick edge in Tim Southee’s overflew into the vacant slip region, but the Mumbai hitter absorbed the strain and showed his mettle to stay in the game. In their sixth-wicket stand, he let Ashwin be the aggressor, and the pattern repeated in the first half of his stand with Saha.

Iyer stepped up to make the most of his first opportunity and cause a selection issue for the team management ahead of the second Test, which Virat Kohli will return for.