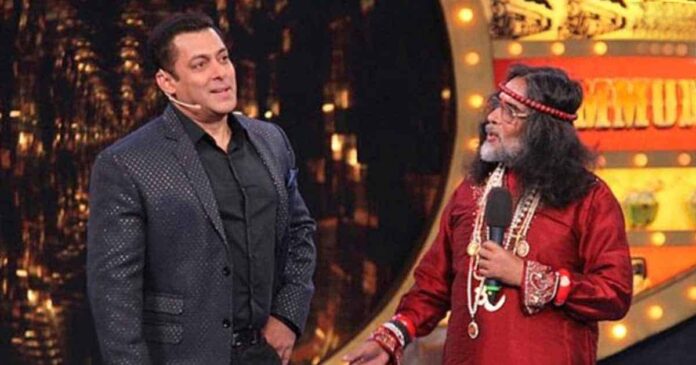 Swami Om never fails to make shocking, viral headlines every day. He was the most orthodox person in the house who use to comment on women’s dressing and also called them characterless, ugly and much more. On being warned also, he did not made any changes in his behavior and continued with whatever he felt like.

After throwing his pee on Bani and Rohan Mehra during the task, he was locked in the jail inside the Bigg Boss house. As per the sources, guards were sent to take Swami om out of the house. After coming out of the house instead of apologizing what he did, he venom-ed against Bigg boss makers and contestants.

The man whom Omji worshiped, the man whom he called ‘greatest hero’ in the Bigg Boss house has transformed to ISI agent now. After being thrown out on Friday, Swami Om calls Salman Khan as ISI agent on the national news channel.

Not only this but also said that Bani slept with wild card entry Jason Shah in the house for four days. If you are thinking that’s it.. then you are wrong. There is more to it.
The dhongi baba Omji claimed that makers of Bigg Boss use to supply drugs to other contestant of house. Instead of apologizing for threatening Bigg Boss, he said that Bigg Boss threatened to kill him.

He also said that there was no harm even if he threw urine on some one. Later he announced that it was only water and not his urine that he threw on Bani.
For the first time in the history Salman Khan’s weekend ka var will on air on Friday instead of Saturday.

A source close to DNA said, Salman doesn’t want Swami Om and Priyanka Jagga in his close vicinity which is why he’s clearly told the Colors team to make sure neither Priyanka nor Swami is invited to the show’s grand finale that’s supposed to take place at the end of this month.

Are Vape Pens Being Overtaken by the Pod Mod Market?

Hina Khan pens down an emotional post for Priyanka Chopra when...