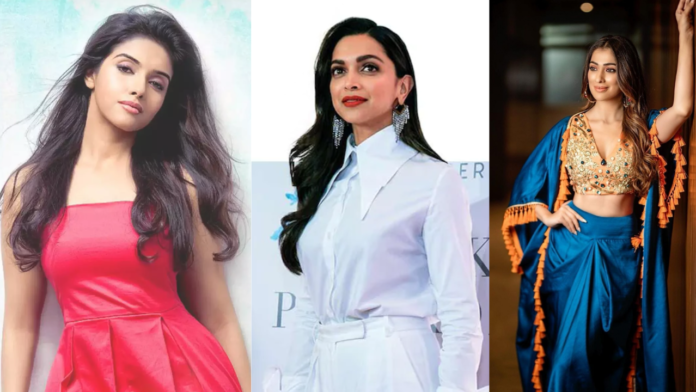 Relationship between cricketers and Bollywood actresses has been one of the highlight of the entertainment industry. The tough cricketers often fall for beauties from Bollywood. Mahendra Singh Dhoni- one of the most popular , successful and reputed Indian cricketer too could not resist from falling for Bollywood divas.

In his most anticipated biopic-Â M.S.Dhoni: The Untold Story, makers have beautifully portrayed his journey from being next door to a successful captain of Indian cricket team, under whom India won the world cup in 2011. The biopic also gave brief glimpse of his love life- the tragic death ofÂ his first girlfriend, Priyanka Jha andÂ meeting Sakshi Rawat. MovieÂ skipped the part whereÂ numerous other names that have been linked with Dhoni.

Here presenting you the names 4 gorgeous actresses who MS Dhoni dated before tieng knot with Sakshi. Have a look:

Rumors of MS Dhoni is dating Ghajni fame actress Asin when they collaborated as brand ambassadors of the same clothing line. Fuel was added to rumors when Dhoni was spotted at Asin’s Lokhandwala apartment before an IPL semi-final in 2010. Crowd was gathered to catch the glimpse of Mahi. All that mess didn’t went well with Sakshi and her parents too because he was already engaged by that time. Later Asin and Dhoni were spotted together in 2011- Srilanka. At that Dhoni was married to Sakhi. The purpose behind meeting was later revealed that Asin just wanted to congratulate the captain cool in person.

After making debut opposite to Shah Rukh Khan in ‘Om Shanti Om’, Deepika Paduone became overnight star. She became first choice of many director in Bollywood. Her fame was on cloud nine when in 2007 MS Dhoni expressed thatÂ Â he has a huge crush on Deepika. Also Dhoni invitedÂ the dimpled beauty to a T20 cricket match against Australia. She was often spotted in stands cheering for Mahi and the team. Few reports also suggest that Mahi choppedÂ Â off his trademark long hair because actress was not fond of them. Mahi always denied the rumors but in no time they became talk of the town.

Captain cool was in relationship with former creative director of Comedy Nights with Kapil. The two were in a secret relationship. Few inside sources revealed the news to media portals and alot about them was written back then. The two were secretly dating and made sure that they never get clicked together anywhere.

Dhoni is now happily married to Sakshi Rawat and couple blessed with baby girl- Ziva who is now often seen accompanying her father to matches. Ziva is now often seen cheering for Mahi and the team at IPL matches. She is one center of attraction at the stadium. Mahi often shares the lovely moments of him and Ziva on his Instagram handle leaving his followers go ‘awww’ over them.

5 Ways In Which Astrology Can Be Life-Changing

List of actresses who dated cricketers but did not marry them