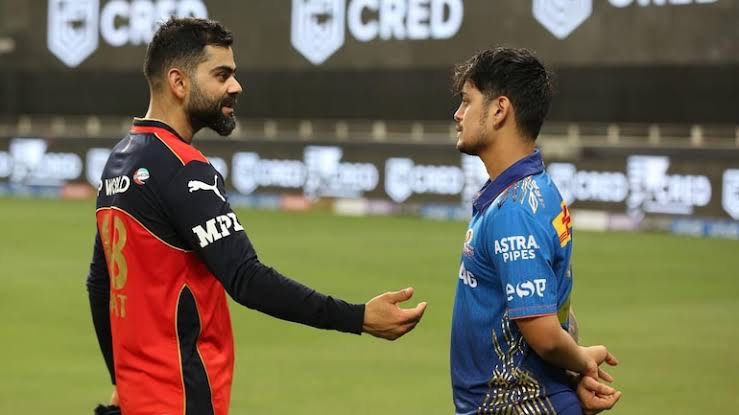 Kishan got MI off to a flying start against SRH in their final league game of the season, looking for an unlikely win by a huge margin of 171 runs to keep their playoff hopes alive. Kishan was promoted to open the batting alongside captain Rohit Sharma, and the Indian wicket-keeper batsman wasted no time in unleashing an all-out assault and smash their bowling unit all around the park. He went after the SRH bowlers right away and got his team off to a fast start, scoring 26 runs in the first two overs.

Kishan smashed 18 runs off Siddharth Kaul’s second over with four consecutive boundaries and did not let him settle whatsoever into his bowling rhythm, before taking Mohammad Nabi and Jason Holder to the cleaners in the next two overs to reach a quickfire fifty off just 16 balls.

As MI piled up on 83 runs in the first six overs by unleashing their power in the powerplay, Kishan notched up his 50 in just 16 balls with the help of nine fours and a six. Kishan hit the fastest fifty by a batsman in the IPL 2021 at the must need match and the third fastest overall.

Kishan was unfortunately dismissed in the 10th over after scoring 84 off 32 balls with eleven fours and four sixes in Abu Dhabi. He got his team off to a quick and fiery start in a must-win game, laying the foundation for a big total.

However, this was the third-fastest fifty in IPL history, with the fastest being hit by KL Rahul, who has a stellar record in the IPL. The captain of the Punjab Kings holds the record for the fastest half-century in competition history. KL Rahul looked unstoppable in an IPL 2018 match against the Delhi Capitals, reaching his fifty off just 14 deliveries to record the fastest 50 in IPL history. He smashed Delhi bowlers all over the place, making history in the third over of his innings.

In this record run, Rahul broke Yusuf Pathan’s record, who had scored a half-century off just 15 deliveries against SRH while playing for KKR way back in the year 2014. Surprisingly, Sunil Narine is next on the records list, having also scored 50 runs in the same number of deliveries while opening with Chris Lynn and This pair created terror in bowlers minds.