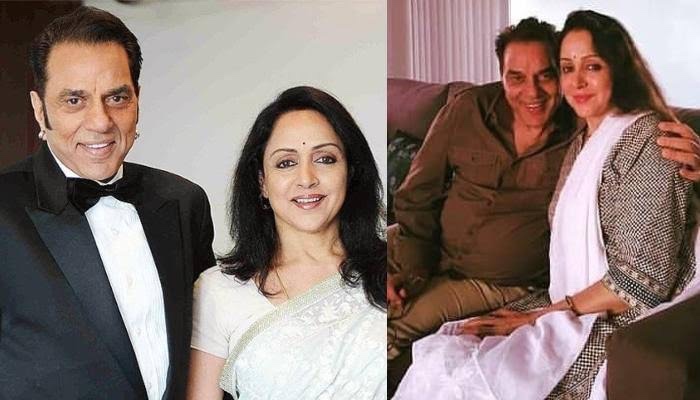 Return to the super charming love storey of dashing Dharmendra and timeless beauty, Hema Malini, by taking a trip down memory lane.

Hema Malini was the original He-Man of Bollywood, Indian cinema’s ‘Dreamgirl.’ What transpired when the two collided? When two people with drop-dead gorgeous looks get together, nothing less than a sizzling love storey is bound to happen. On the sets of Tum Haseen Main Jawan in 1970, Hema Malini and Dharmendra fell in love. Dharmendra was already married to Prakash Kaur and the father of two sons, Sunny and Bobby, at the time. But that didn’t stop him from wooing Hema and falling in love with her. Hema had also turned down several other marriage proposals from actors such as Sanjeev Kumar and Jeetendra at the time.

Hema did not respond to Dharmendra because she did not want to be involved with a married man. But then they fell in love and married in 1980. Because Dharmendra’s first wife, Prakash Kaur, did not want a divorce, they converted to Islam before marrying.

Hema Malini’s father, like any other father, was adamantly opposed to their marriage because he didn’t want his daughter to marry someone who was already married. Even though Hema married Dharmendra after her father died, her mother was deeply hurt. According to reports in the media, Hema and Dharmendra were so in love with each other that they went against their families’ wishes and converted to a different religion.

“Dilawar Khan Kewal Krishn (44 years) accepted Aisha Bi R. Chakravarty (29 years) as his wife on 21 August 1979 at a Mehr of Rs 111,000 in the presence of two legal witnesses,” according to their Nikahnama, according to Outlookindia.com. Because Hema Malini is an Iyengar, the nikah was kept a secret, and the couple later married in Iyengar style.

According to Hema Malini’s biography, she was drawn to Dharmendra because he was strong and silent, just like her mother. Her husband is very romantic, according to the actress. He claims that he still looks at her the same way he did when they first met.

It’s no surprise that Dharmendra still looks at her the same way he did when they first met; the diva is as beautiful as ever.

Hema Malini revealed in an interview that it was the song Main Jat Yamla Pagla Deewana that made her fall in love with Dharmendra. She also said that it was his adorable dance moves in the music that made her instantly fall in love with him. During the filming of a particular scene in Sholay, it was rumoured that Dharamendra bribed the light boys with money to cause havoc on the set. The constant retakes provided him with numerous opportunities to hold Hema Malini.

Hema is made to feel special by Dharmendra. They have remained in love and affection for each other regardless of their age or the passage of time. They dated for five years before marrying. Esha and Ahana Deol, the couple’s two daughters, The Couple, have been married for almost 38 years.

They exemplify love in all of its forms. They still look the same whenever they appear on screen or in any show—beautiful and madly in love! This famous Jodi of Veeru and Basanti has acted in 42 films together and is still talked about. The audience adored their on-screen chemistry as much as their off-screen chemistry. Their love has endured and served as an inspiration to many young people in the past.

5 Most Celebrated Luxury Brands in India